After our busy weekend, we still had a little time to spend here in the glorious city of London. Tomorrow we leave on a little weekend getaway for David’s birthday (as he proofreads for me and does not yet know where we’re going, you’ll have to wait to find out), so I am taking a little pause to record a bit about the last several days.

On Tuesday we embarked on a walking tour designed by our friend Matt. Matt lived in London for a year while his wife (also our dear friend) Jenny was completing a master’s program here. The walking tour was very enjoyable and mostly along the river. We began the day with time in my favorite part of London — Parliament Square.

me & a bunch of other tourists

another photo of Victoria Tower

We had a very enjoyable walk along the river, and saw, among other buildings, the Globe Theatre. 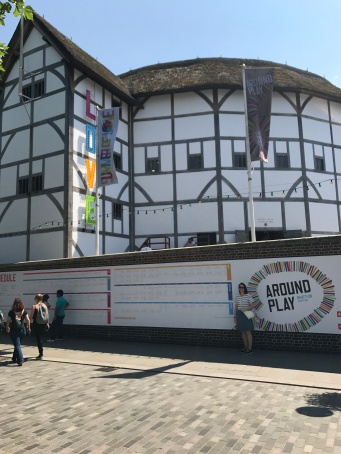 We were very ready for lunch by the time we got to Borough Market! We began our meal with some vegetable samosas and juice. This was followed by one order of steak & ale pie and one of fish & chips (we shared everything). It was all very good, especially as we’d been walking all morning.

We continued our walking-tour and ended at The George Inn, a VERY old pub where supposedly William Shakespeare dined (as well as, obviously much later, Charles Dickens). Jenny & Matt sent us £10 before we left on our trip and told us to “get a couple of pints on them” — so of course we did so! I had cider and David had Old Speckled Hen, a favorite of his dad’s. On our way back to our AirBnB we crossed the London Bridge and had good views of Tower Bridge, which I adore.

Cider at the George

On London Bridge, a bit windy

On Wednesday we went to Paddington Station to pay a visit to Paddington Bear. David has never read these books but I adored them. We are planning to read them together later this year. 🙂 It was a lot of fun to see the painted bench & the statue in the station. 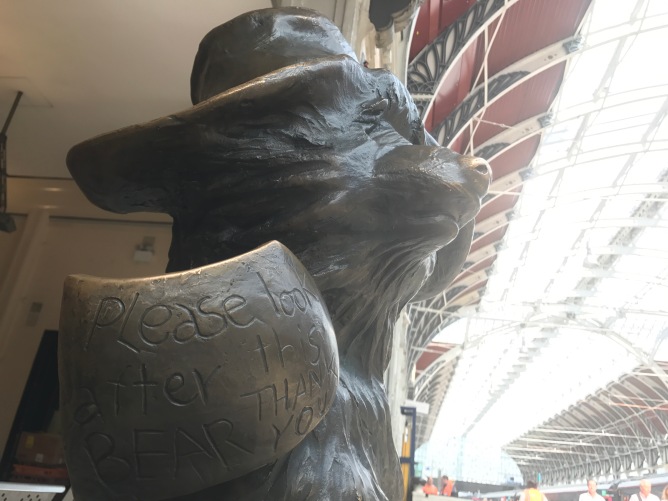 Next, we went to the British Museum. David has very fond memories of visiting it with his parents and sister, Mary, when their family traveled abroad about ten years ago. We visited the rooms about the British Isles (both pre-Roman & Roman Britain) and saw Lindow Man (entirely by accident) which was pretty crazy. Then we stumbled upon, and followed, the LGBTQ trail in the museum. My favorite part was the cocoa cups owned by a British lesbian couple in the 19th century.

After this, we went up to Hampstead to visit the Burgh House & Hampstead Museum where our dear friend Jenny completed her internship while getting her Master’s in London. Hampstead is SUCH a lovely, quiet neighborhood. We chatted for a long time with the woman at the front desk at Burgh House and heard from her about how different artifacts of the house survived WWII, and the different people who lived in the house over the years. She also told us that one of the main ways they stay afloat is by renting out the beautiful hall for weddings. After browsing the house & museum displays, we had a lovely tea in the garden café there. 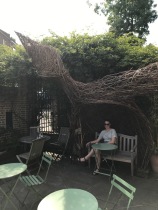 cool sculpture in the garden 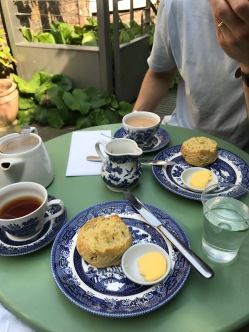 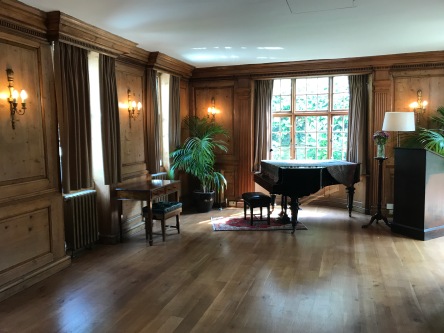 the hall at Burgh House

We ended our long day with a quick stop at the Twinings tea shop & museum (I drink at least one cup of Twinings brand tea every day) and dinner at Ye Olde Cheshire Cheese, another very old pub. (Lots of those in London.) 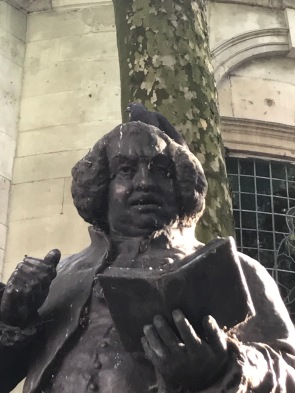 Samuel Johnson with a bird on his head

the parrot that lives in Ye Olde Cheshire Cheese

Thursday was our last day (until August) in London and was a Harry Potter day! (If you know me literally at all, you may have caught on that Harry Potter is my favorite thing in the universe.) We visited a few famous sites, including Leavesden Market (AKA Diagon Alley), the Millenium Bridge (which is featured in the movie Harry Potter & The Half-Blood Prince), & of course visited Platform 9¾ where we had our pictures taken. 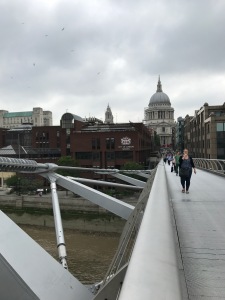 the Leaky Cauldron is now a blue optician’s shop

Quick lunch back at the Borough Market so that I could FINALLY get my much-longed-for Prosecco spritzer. We had samosas and artisinal jammie dodgers. 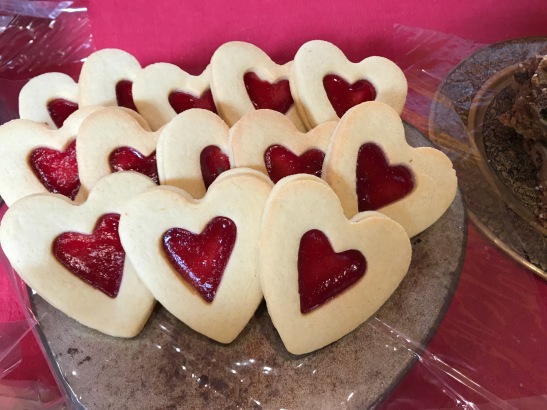 Then, we visited Tower Bridge (my beloved!) and David took me on a fancy date night — first, dinner at an Italian place along the Thames, and then drinks at a bar on the 32nd floor of the Shard (!!!). It was SO fancy. I think the hostess could sense the Velcro on my sandals. 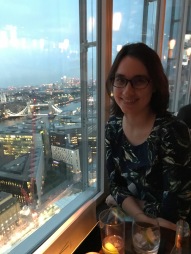 wow so high up!

watching the drawbridge on Tower Bridge open for a TINY boat

on our way out. getting glared at by fancy hostess for our dorky selfies.

We had such a good time in London, but kind of ran ourselves ragged. That was partly because our accommodations tended to be waaay on the edge of town. So, once we were out for the day, we usually stayed out. Plus, there was just so much to fit in! We’re excited to spend another day or two there in August without the big checklist hanging over our heads. It was definitely a great way to start the summer off with a bang! Until August, London! 🙂

This is a text widget, which allows you to add text or HTML to your sidebar. You can use them to display text, links, images, HTML, or a combination of these. Edit them in the Widget section of the Customizer.
Loading Comments...
Comment
×